From Equestrian Dawn Wiki
Jump to navigation Jump to search

Before escaping to Ponyville in what she may claim to be a grueling feat of extreme hardship, Fizzle Flash lived with two earth ponies who led a caravan. Whether or not these ponies were her actual parents remains unclear, but the wagons they traveled with were not for friendly trade. Instead, the goods they drove were for illicit transactions.

When her Ma and Pa would go into cities, she would be left to stay in the wagon, terrified by stories of knapperponies. However, Fizzle did not want to live the shady life of her caretakers and one day in Coltalia, the filly made her escape to Ponyville.

Not so much as an era but a period of a few weeks. After arriving in Ponyville, Fizzle Flash met many ponies including (but not limited to): Clover Cute, Nova Borealis, Twilight Sparkle, Seashore, and Moonstone. She also met a lazy dragon named Zaukodar and, somehow, a competition arose from their second meeting. This, along with her interaction with Twilight Sparkle, sparked the filly's desire to learn magic. Thus, she befriended Morning Glory and Steelshine who took her to Canterlot.

For the first few weeks, Fizzy lived in a guest suite in the Canterlot Palace with Morning Glory. Later, Steelshine purchased a whitestone in the residential district and invited the filly and her apparent caretaker to stay with him.

Fizzle wasn't adept enough in magic to attend a special school and really had little schooling altogether. Therefore, the filly set out for a number of days wandering around Canterlot and asking any unicorn to be her instructor. She eventually found the Captain of the Royal Guard, Shining Armor, who agreed to teach her.

Fizzle also met Sprocket in Canterlot, whom she promptly took a liking to and helped obtain permission for her to stay in Steelshine's house. She and Sprocket later adopted each other as sisters. 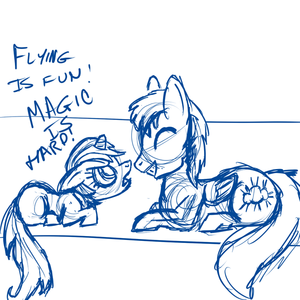 Fizzle Flash is a cheerful filly with bright green eyes and a wide smile on her short muzzle. Her coat is a pure white, rivaled only by the hue of fresh-fallen snow. A pale pink mane rests atop her head with a jagged style, with a large white streak cutting through the right side. Flowing past her ears, her mane falls to her shoulders. A small spiraling horn of white pokes through her hair, shining brilliantly. Behind her, a tail of pink, again contrasted with a stripe of white, bounces along as she trots merrily. Her flank is blank, clearly indicating that she has not discovered her special talent as of yet. She isn't too young of a filly, her legs already showing some height, perhaps marking the progress of a future slender pony.

Curious and hyperactive, Fizzy is a pony that attempts to put on a bold face. If you manage to crack the small shell of her assertive attitude, she may be very sweet.

On Fizzle Flash's flank is the image of a pink hourglass, tilted at a slight angle, superimposed upon a similarly colored lightning bolt. The circumstances surrounding the appearance of cutie mark were witnessed only by Shining Armor and Dynamite Rave and the filly does not enjoy discussing it all that much.

Fizzle Flash has a yet undiscovered skill of time magic. Her abilities with such will be greatly restricted and rarely utilized. The most prevalent manifestation of this magical talent will be the ability to speed herself up and complete some tasks or move more quickly. Within reason.

This section is under review and may be subject to some change.

Fizzle met Morning in Ponyville and has since been adopted by her, or adopted her as her mother. She loves the mare to no end and Glory's stories and magic fill the filly with intrigue and inspiration.

Shining Armor marvelously offered to instruct Fizzy in the ways of magic. The filly adopted this stallion as her father, stubbornly insisting that Morning Glory could be her mother even if Shining was the father. She got her way and she is fairly certain that that was the best decision she has ever made thus far.

Another pony Fizzle Flash met in Ponyville, Steelshine is a gallant knight who offered to take the filly to Canterlot to begin magic training and, being very generous, provided her with a place to stay.

Fizzy's adoptive sister, Sprocket, is a pony the filly looks up to. Though only a few years her elder, Fizzle believes Sprocket to be the smartest pony she has ever met.

The reason Fizzy got her cutie mark and her adorable coltfriend, Dynamite Rave is treasured by the filly who loves him almost unconditionally. He is, as Fizzy is wont to say, one of the best things in her life. Ever. Although he is not as upbeat as often as her, she couldn't bear to lose him and her cutie mark stands as a testament to that.