Babs Seed is a cousin to the Ponyville Apple family, living in Manehattan. Like her cousin Apple Bloom and her fellow Cutie Mark Crusaders, she's a blank flank - but you better not tease or bully her over it.

Babs Seed grew up in a blue-collar part of Manehattan. Her folks are more like the Apples in temperament than the Oranges, so she doesn't have the high-strung rich attitude most ponies expect out of Apple relatives from the area. She's about the same age as Ponyville's Cutie Mark Crusaders and still doesn't have her cutie mark yet, which has led to merciless teasing by other foals her age back home.

During a visit to Ponyville, she visited her cousin Apple Bloom and her friends. While doing so, Diamond Tiara and Silver Spoon dropped by to tease and harass the Crusaders about a project of theirs. Desperate to belong and not be bullied herself again, she fell in with those two and started bullying them as well.

The Crusaders decided to strike back by recreating the first project Babs destroyed, then baited her into 'stealing' it. It was sabotaged, and had it succeeded, it would have sent Babs into the mud near Ponyville Lake. Applejack explained why Babs had come out to Ponyville in the first place, and the Crusaders saved her, careening into the mud in her place.

After nearly falling victim to the Crusaders trying to get back at her, Babs learned an important lesson about becoming a bully herself. She now uses her forceful attitude against bullies, intimidating them into backing off by threatening them with what they fear the most - usually meaning going to their parents. It's worked so far. She was inducted into the Cutie Mark Crusaders and went back home to start a Manehattan branch of the club, using her skills to help other ponies like herself. 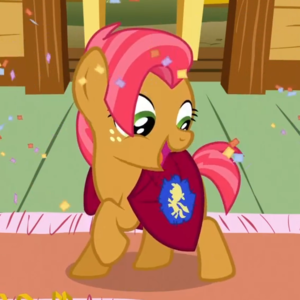 Babs in her Crusader cape

Babs is an older earth pony filly, not quite adolescent. She has a golden brown coat and a two-tone pink mane and tail, both worn short. Despite the shortness of her mane, she is often blowing part of it out of her green eyes. Below those eyes are a few white freckles on each side of her face. Assuming she's not shielding her flank from your eyes with her tail, you can see that it is in fact blank.

At first glance, Babs appears quiet and a little shy, somewhat typical for a bullied foal. Once she gets to know you, though, her true personality shines through. She is spunky and high-spirited with lots of attitude, but a kind heart. Towards bullies, she will act intimidating and forceful, and she doesn't make threats - she makes promises.